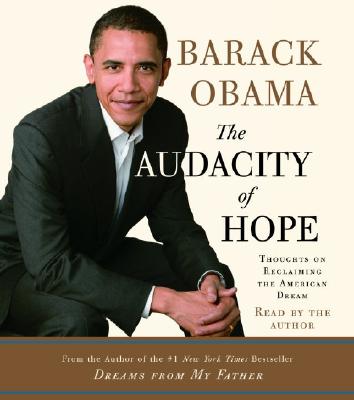 In July 2004, Barack Obama electrified the Democratic National Convention with an address that spoke to Americans across the political spectrum. Now, in The Audacity of Hope, Senator Obama calls for a different brand of politics–a politics for those weary of bitter partisanship and alienated by the “endless clash of armies” we see in Congress and on the campaign trail; a politics rooted in the faith, inclusiveness, and nobility of spirit at the heart of “our improbable experiment in democracy.” He also writes, with surprising intimacy and self-deprecating humor, about settling in as a senator, seeking to balance the demands of public service and family life, and his own deepening religious commitment.
At the heart of this audiobook is Senator Obama’s vision of how we can move beyond our divisions to tackle concrete problems. Underlying his stories about family, friends, members of the Senate, and even the president is a vigorous search for connection: the foundation for a radically hopeful political consensus.
A senator and a lawyer, a professor and a father, a Christian and a skeptic, and above all a student of history and human nature, Senator Obama has written a book of transforming power.


Praise For The Audacity of Hope: Thoughts on Reclaiming the American Dream…

"What's impressive about Obama is an intelligence that his new books diplays in aubundance."
—Washington Post Book World