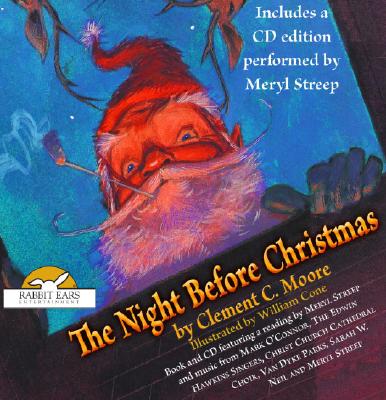 A holiday favorite for children of all ages, The Night Before Christmas comes alive in the joyous performance by Oscar® winner Meryl Streep and several outstanding musicians in this illustrated book and compact disc edition.


Praise For The Night Before Christmas…

“A snow covered Victorian New York City is the location for Lobel’s version of this classic poem. Jolly St. Nick arrives, leaving an array of toys before he flies over a majestic scene of the Brooklyn Bridge and city skyline. Lobel’s paintings are gentle and reassuring, filled with intricate detail and family love.”—School Library Journal, Starred

Considered by many movie reviewers to be the greatest living film actress, Meryl Streep has been nominated for the Academy Award(R) thirteen time and won twice, for" Kramer vs. Kramer" and "Sophie's Choice." Her many film credits include "The Deer Hunter," "Silkwood," "Out of Africa," "The Hours," "The Orchid Thief," and "Angels in America."
Loading...
or
Not Currently Available for Direct Purchase