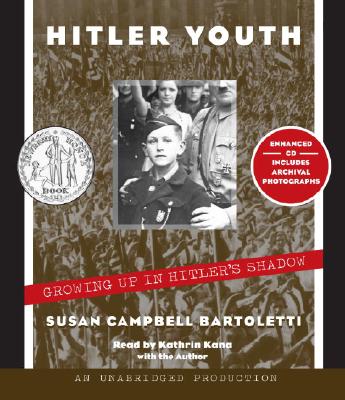 ENHANCED CD: Includes Archival Photographs
On January 30, 1933, Adolf Hitler was appointed chancellor of Germany, thanks largely to the efforts of the Hitler Youth, whose organized propaganda marches throughout Germany helped the Nazi Party grow in strength. By 1939, it is estimated that more than seven million boys and girls belonged to the Hitler Youth.
"Hitler Youth: Growing Up in Hitler's Shadow" is the riveting and often chilling tale of a generation of young people who devoted their energy and passion to the Hitler Youth organization and left an indelible mark on world history. Award-winning author Susan Campbell Bartoletti infuses the work with the voices of both former Hitler Youth members and young people who resisted the powerful Nazi movement. These voices stand alongside those of Jewish youths and others who were senselessly and brutally targeted by the Third Reich. What emerges is the story of average children and teenagers faced with extraordinary and unenviable choices. The paths taken by the Hitler Youth and their struggle to come to terms with their actions at the end of World War II are sure to spark debate among young readers faced with the question of whether the horrors of Hitler's Germany could ever cast dark shadows again.

Susan Campbell Bartoletti is the author of picture books, novels, and nonfiction for children, including the ALA Robert F. Sibert Medal--winning "Black Potatoes: The Story of the Great Irish Famine, 1845--1850" and "Dear America: A Coal Miner's Bride." She lives with her family in Moscow, Pennsylvania.
Loading...
or
Not Currently Available for Direct Purchase