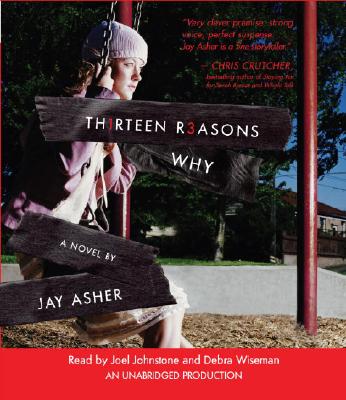 **SOON TO BE A NETFLIX ORIGINAL SERIES**


You can’t stop the future.
You can’t rewind the past.
The only way to learn the secret . . . is to press play.

“Every once in a while you come across a book that you can’t get out of your mind, one you have to rush back to if you must put it down for some reason. Jay Asher’s Thirteen Reasons Why is one of those books, and is at the very top of my personal Must-Read list.” —Ellen Hopkins, bestselling author of Tricks, Identical, Crank, Burned, Impulse, and Glass

“A spectacular first novel. Jay Asher tells his story with such honesty and simplicity that the tragedy feels shatteringly real.” —Gordon Korman, author of Son of the Mob and Jake, Reinvented

Jay Asher got the idea for Thirteen Reasons Why at a museum. While taking an audio tour, he was struck by the eeriness of the voice in his ear–a woman who described exactly what he was looking at, but wasn’t there. Jay lives on the central coast of California. Thirteen Reasons Why is his first book. Find out more about him at www.discomermaids.blogspot.com.
Loading...
or
Not Currently Available for Direct Purchase