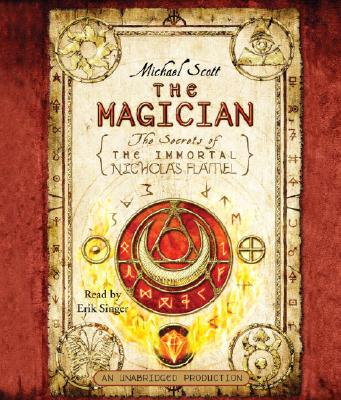 Read the second book in the "New York Times" bestselling The Secrets of the Immortal Nicholas Flamel series, perfect for fans of "The Maze Runner" and Percy Jackson and the Olympians.
After fleeing Ojai, Nicholas, Sophie, Josh, and Scatty emerge in Paris, the City of Lights. Home for Nicholas Flamel. Only this homecoming is anything but sweet. Perenell is still locked up back in Alcatraz and Paris is teeming with enemies. Nicollo Machiavelli, immortal author and celebrated art collector, is working for Dee. He''s after them, and time is running out for Nicholas and Perenell. For every day spent without the Book of Abraham the Mage, they age one year--their magic becoming weaker and their bodies more frail. For Flamel, the Prophesy is becoming more and more clear.
It's time for Sophie to learn the second elemental magic: Fire Magic. And there''s only one man who can teach it to her: Flamel's old student, the Comte de Saint-Germain--alchemist, magician, and rock star. Josh and Sophie Newman are the world's only hope--if they don't turn on each other first.
Praise for The Secrets of the Immortal Nicholas Flamel series: "
The Alchemyst"
STAR] " A] A riveting fantasy...While there is plenty here to send readers rushing to their encyclopedias...those who read the book at face value will simply be caught up in the enthralling story. A fabulous read."--"School Library Journal," Starred
"The Magician"
STAR] "Readers will be swept up by a plot that moves smartly along, leaving a wide trailer of destruction and well-timed revelations."--"Kirkus Reveiws," Starred
"The Sorceress"
"Master yarnspinner that he is, Scott expertly cranks up the suspense while keeping his now-large cast in quick motion....This page -turner promises plenty of action to come."--"Kirkus Reviews"
"The Necromancer"
"Unrelenting forward momentum....This book will thrill fans."--"School Library Journal"

Michael Scott is the "New York Times" bestselling author of The Secrets of the Immortal Nicholas Flamel series, an authority on mythology and folklore, and one of Ireland's most successful authors. A master of fantasy, science fiction, horror, and folklore, Michael has been hailed by the Irish Times as "the King of Fantasy in these isles." The Alchemyst is the first book in the Nicholas Flamel series. Look for book two, The Magician; book three, The Sorceress; book four, The Necromancer; book five, The Warlock; and book six, The Enchantress, all available from Delacorte Press. You can follow Michael Scott on Twitter @flameauthor and visit him at DillonScott.com.

Praise For The Magician…

Starred Review, Kirkus Reviews, May 15, 2008:
“Readers will be swept up by a plot that moves smartly along, leaving a wide trail of destruction and well-timed revelations.”