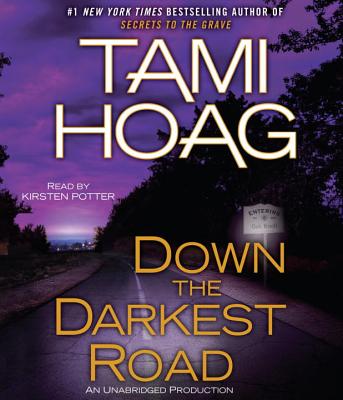 Down the Darkest Road

Four years after the unsolved disappearance of her sixteen-year-old daughter, Lauren Lawton is the only one still chasing the ghosts of her perfect Santa Barbara life. The world has given her daughter up for dead. Her husband ended his own life in the aftermath. Even Lauren’s younger daughter is desperate to find what’s left of the childhood she hasn’t been allowed to have.
Lauren knows exactly who took her oldest child, but there is not a shred of evidence against the man. Even as he stalks her family, Lauren is powerless to stop him. Looking for a fresh start in a town with no memories, Lauren and her younger daughter, Leah, move to idyllic Oak Knoll. But when Lauren’s suspect turns up in the same city, it feels to all the world that history is about to repeat itself. Leah Lawton will soon turn sixteen, and Oak Knoll has a cunning predator on the hunt.
Sheriff’s detective Tony Mendez and his team begin to close in on the suspected killer, desperate to keep the young women of their picturesque town safe. But as the investigators sift through the murky circumstances of an increasingly disturbing case, a stunning question changes everything they thought they knew.

"Deeper Than the Dead" introduced Tami Hoag's millions of fans to Oak Knoll, a small California town that, in the mid-eighties, seemed as idyllic as any . . . until the See-No-Evil killer shattered that notion. It took FBI agent Vince Leone and a new technique called "profiling" to put an end to the trauma.

"Secrets to the Grave" brought Leone's teacher-turned-child- advocate wife, Anne, into a central role. Together with Vince and local sheriff 's deputy Tony Mendez, she solved an Oak Knoll murder with a particularly challenging mystery: The victim never existed.

And now Hoag returns once more to Oak Knoll for the third installment of this bestselling series. Through Leone's pioneering, science-based investigatory skills, Hoag explores the early days of forensic police work. And through the chilling case at the heart of "Down the Darkest Road," she hooks ever more readers into the meticulously crafted, all-too-terrifying world of Oak Knoll, where the scariest secrets of all can be found . . . Down the Darkest Road.
Loading...
or
Not Currently Available for Direct Purchase