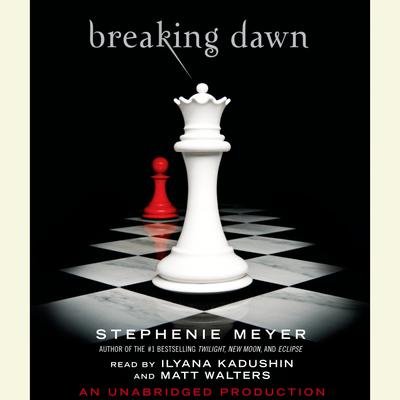 To be irrevocably in love with a vampire is both fantasy and nightmare woven into a dangerously heightened reality for Bella Swan. Pulled in one direction by her intense passion for Edward Cullen, and in another by her profound connection to werewolf Jacob Black, she has endured a tumultuous year of temptation , loss, and strife to reach the ultimate turning point. Her imminent choice to either join the dark but seductive world of immortals or pursue a fully human life has become the thread from which the date of two tribes hangs.

Now Bella has made her decision; a startling chain of unprecedented events is about to unfold with potentially devastating and unfathomable consequences. Just when the frayed strands of Bella's life--first discovered in Twilight, then scattered and torn in New Moon and Eclipse--seem ready to heal and knit together, could they be destroyed...forever?

The astonishing, breathlessly anticipated conclusion to the Twilight Saga, Breaking Dawn illuminates the secrets and mysteries of this spellbinding romantic epic.

Stephenie Meyer graduated from Brigham Young University with a degree in English literature, and she lives with her husband and three young sons in Arizona. After the publication of her debut novel, Twilight, booksellers chose her as one of the "most promising new authors of 2005". (Publishers Weekly.) Look for Twilight, New Moon, and Eclipse on audio from Listening Library.