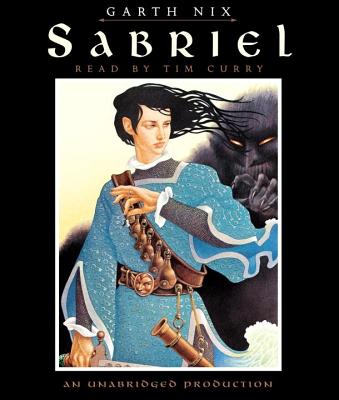 Since childhood, Sabriel has lived outside the walls of the Old Kingdom, away from the random power of Free Magic, and away from the Dead who refuse to stay dead. But now her father, the Charter-Mage Abhorsen, is missing, and to find him Sabriel must cross back into that world. With Mogget, whose feline form hides a powerful, perhaps malevolent spirit, and Touchstone, a young Charter Mage, Sabriel travels deep into the Old Kingdom. There, she confronts an evil that threatens much more than her life - and comes face-to-face with her own hidden destiny.

Garth Nix was born on a Saturday in Melbourne, Australia. He has won the Aurealis Awards for Best Fantasy Novel, Best Young Adult Novel, and Best Children's Novel. His novels include "Sabriel," "Lirael," "Abhorsen," "Shade's Children," and "The Ragwitch," as well as the books in The Seventh Tower series and the first five books of The Keys to the Kingdom, "Mister Monday," "Grim Tuesday," "Drowned Wednesday," "Sir Thursday," and "Lady Friday."
Loading...
or
Not Currently Available for Direct Purchase