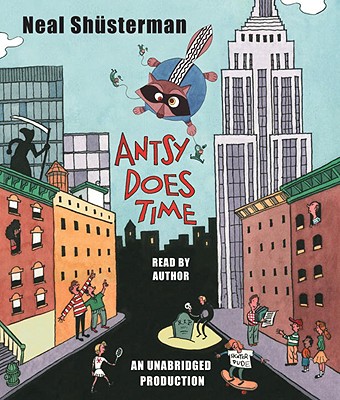 It was a dumb idea, but one of those dumb ideas that accidentally turns out to be brilliant–which, I’ve come to realize, is much worse than being dumb. My name’s Antsy Bonano–but you probably already know that–and unless you got, like, memory issues, you’ll remember the kid named the Schwa, who I told you about last time. Well, now there’s this other kid, and his story is a whole lot stranger. It all started when Gunnar Ümlaut and I were watching three airborne bozos struggle with a runaway parade balloon. That’s when Gunnar tells me he’s only got six months to live. Maybe it was because he said he was living on borrowed time, or maybe it was just because I wanted to do something meaningful for him, but I gave him a month of my life . . .

. . . And that’s when things began to get seriously weird.

Neal Shusterman's novels have been honored with awards from the International Reading Association, the American Library Association, and readers in many states. His novels span many genres, from humor to suspense thrillers to science fiction. "Antsy Does Time" is a companion to "The Schwa Was Here," which was the 2005 winner of the Boston Globe/Horn Book Award for Fiction. Look for "The Schwa Was Here" on audio from Listening Library. Visit the author on his website, at www.storyman.com.
Loading...
or support indie stores by buying on
(This book is on backorder)