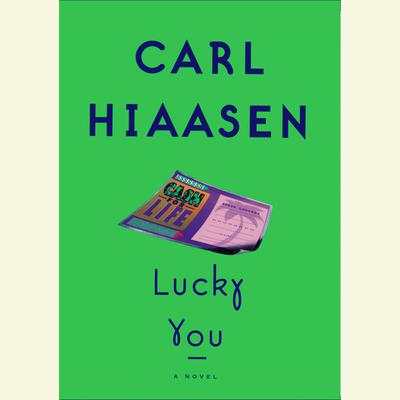 Grange, Florida, is famous for its miracles--the weeping fiberglass Madonna, the Road-Stain Jesus, the stigmata man. And now it has JoLayne Lucks, unlikely winner of the state lottery.

Unfortunately, JoLayne's winning ticket isn't the only one. The other belongs to Bodean Gazzer and his raunchy sidekick, Chub, who believe they're entitled to the whole $28 million jackpot. And they need it quickly, to start their own underground militia before NATO troops invade America.

But JoLayne Lucks has her own plans for the Lotto money--an Eden-like forest in Grange must be saved from strip-malling. When Bode and Chub brutally assault her and steal her ticket, JoLayne vows to track them down, take it back--and get revenge.

The only one who can help is Tom Krome, a big-city investigative journalist now bitterly consigned to writing frothy features for a midsized central Florida newspaper. With a persuasive nudge from JoLayne, Krome is about to become part of a story that's bigger and more bizarre than anything he's ever covered.

Chasing two heavily armed psychopaths down the coast of Florida is reckless enough, but Tom's got other problems--the murderous attention of a jealous judge; an actress wife who turns fugitive to avoid divorce court; an editor who speaks in tongues; and Tom's own growing fondness for the future millionairess with whom he's risking his neck.

The pursuit takes them from the surreal streets of Grange to a buzzard-infested island deep in Florida Bay, where they finally catch up with the fledgling militia--Chub, Bode Gazzer, a newly recruited convenience-store clerk and their baffled hostage, a Hooters waitress.

The climax explodes with the hilarious mayhem that is Carl Hiaasen's hallmark. Lucky You is his funniest, most deliriously gripping novel yet.

Carl Hiaasen was born and raised in Florida. He is the author of ten previous novels, including the best-selling Skinny Dip, Sick Puppy, and Lucky You, and two best-selling children’s books, Hoot and Flush. He also writes a weekly column for The Miami Herald.