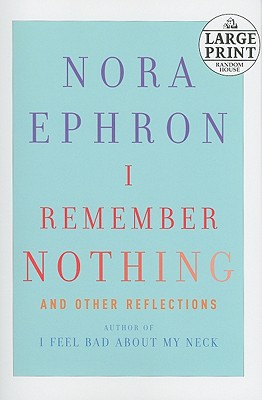 Nora Ephron returns with her first book since the astounding success of I Feel Bad About My Neck, taking a cool, hard, hilarious look at the past, the present, and the future, bemoaning the vicissitudes of modern life, and recalling with her signature clarity and wisdom everything she hasn’t (yet) forgotten.

Ephron writes about falling hard for a way of life (“Journalism: A Love Story”) and about breaking up even harder with the men in her life (“The D Word”); lists “Twenty-five Things People Have a Shocking Capacity to Be Surprised by Over and Over Again” (“There is no explaining the stock market but people try”; “You can never know the truth of anyone’s marriage, including your own”; “Cary Grant was Jewish”; “Men cheat”); reveals the alarming evolution, a decade after she wrote and directed You’ve Got Mail, of her relationship with her in-box (“The Six Stages of E-Mail”); and asks the age-old question, which came first, the chicken soup or the cold? All the while, she gives candid, edgy voice to everything women who have reached a certain age have been thinking . . . but rarely acknowledging.

Praise For I Remember Nothing: And Other Reflections…

Nora Ephron is the author of the huge best seller "I Feel Bad About My Neck" as well as "Heartburn, Crazy Salad, Wallflower at the Orgy, " and "Scribble Scribble." She recently wrote and directed the hit movie "Julie & Julia "and has received Academy Award nominations for Best Original Screenplay for "When Harry Met Sally . . ., Silkwood, " and "Sleepless in Seattle, " which she also directed. Her other credits include the script for the current stage hit "Love, Loss, and What I Wore" with Delia Ephron. She lives in New York City with her husband, writer Nicholas Pileggi. "From the Hardcover edition."
Loading...
or
Not Currently Available for Direct Purchase