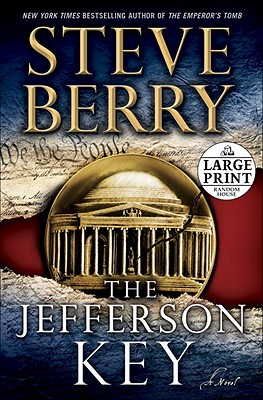 Four United States presidents have been assassinated—in 1865, 1881, 1901, and 1963—each murder seemingly unrelated and separated by time.

But what if those presidents were all killed for the same reason: a clause in the United States Constitution—contained within Article 1, Section 8—that would shock Americans?

This question is what faces former Justice Department operative Cotton Malone in his latest adventure.  When a bold assassination attempt is made against President Danny Daniels in the heart of Manhattan, Malone risks his life to foil the killing—only to find himself at dangerous odds with the Commonwealth, a secret society of pirates first assembled during the American Revolution. In their most perilous exploit yet, Malone and Cassiopeia Vitt race across the nation and take to the high seas. Along the way they break a secret cipher originally possessed by Thomas Jefferson, unravel a mystery concocted by Andrew Jackson, and unearth a centuries-old document forged by the Founding Fathers themselves, one powerful enough—thanks to that clause in the Constitution—to make the Commonwealth unstoppable.

Praise For The Jefferson Key…

“One of the most spellbinding and ingenious openings in all of thrillerdom. The cast of characters is huge but every one of them is memorable. The action is intense and masterfully choreographed. As always with Steve Berry, you’re educated about significant things while your knuckles are turning white and the pages are flying. Easily Cotton Malone’s most epic, swashbuckling adventure.” —David Baldacci

"The Constitution. . . secret codes . . . loads of history. . . AND pirates! What else does anyone need? The Jefferson Key won't just haunt your nights--it'll haunt your life. Cotton Malone is coming back to the scariest place of all: Home." —Brad Meltzer

"THE JEFFERSON KEY starts with a bang and holds the reader in its grip until the last page. Fascinating American history, up-to-the-minute politics, pulse-pounding action. This is a story Mitch Rapp would love." —Vince Flynn

Steve Berry is the "New York Times" and #1 internationally bestselling author of "The Lincoln Myth, The King's Deception, The Columbus Affair, The Jefferson Key, The Emperor's Tomb, The Paris Vendetta, The Charlemagne Pursuit, The Venetian Betrayal, The Alexandria Link, The Templar Legacy, The Third Secret, The Romanov Prophecy, "and" The Amber Room." His books have been translated into 40 languages with more than 18,000,000 copies in 51 countries.

For more information, visit www.steveberry.org. "From the Hardcover edition."
Loading...
or
Not Currently Available for Direct Purchase