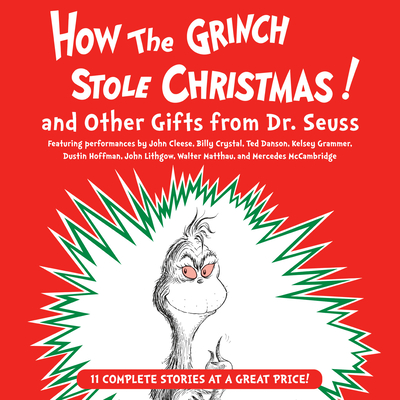 How the Grinch Stole Christmas and Other Gifts from Dr. Seuss (Classic Seuss) (CD-Audio)

How the Grinch Stole Christmas
Read by Walter Matthau

The Cat in the Hat
Read by Kelsey Grammer

Horton Hears a Who
Read by Dustin Hoffman

Did I Ever Tell You How Lucky You Are?
Read by John Cleese

The Lorax
Read by Ted Danson

Yertle the Turtle and Other Stories: Gertrude McFuzz; The Big Brag
Read by John Lithgow

The Cat in the Hat Comes Back
Read by Kelsey Grammer

Winner of the Pulitzer Prize in 1984 and three Academy Awards, Seuss was the author and illustrator of 44 children's books, some of which have been made into audiocassettes, animated television specials, and videos for children of all ages. Even after his death in 1991, Dr. Seuss continues to be the best-selling author of children's books in the world.
or
Not Currently Available for Direct Purchase
Copyright © 2020 American Booksellers Association