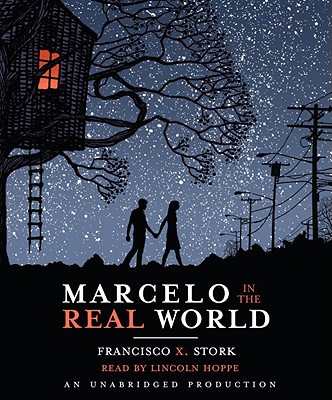 Marcelo in the Real World

Marcelo Sandoval hears music that nobody else can hear-part of an autism-like condition that no doctor has been able to identify. But his father has never fully believed in the music or Marcelo's differences, and he challenges Marcelo to work in the mailroom of his law firm for the summer. . . to join "the real world."
There Marcelo meets Jasmine, his beautiful and surprising coworker, and Wendell, the son of another partner in the firm. He learns about competition and jealousy, anger and desire. But it's a picture he finds in a file-a picture of a girl with half a face-that truly connects him with the real world: its suffering, its injustice, and what he can do to fight.
Reminiscent of "The Curious Incident of the Dog in the Night-Time" in the intensity and purity of its voice, this extraordinary audiobook is a love story, a legal drama, and a celebration of the music each of us hears inside.

Francisco Stork studied Latin American literature at Harvard before completing a law degree at Columbia University. "Publishers Weekly" praised his first novel "The Way of the Jaguar," as "a splendidly intense debut." His second book, "Behind the Eyes," was selected as both a Commended title for the Americas Award and a New York Public Library Book for the Teen Age.
Loading...
or
Not Currently Available for Direct Purchase