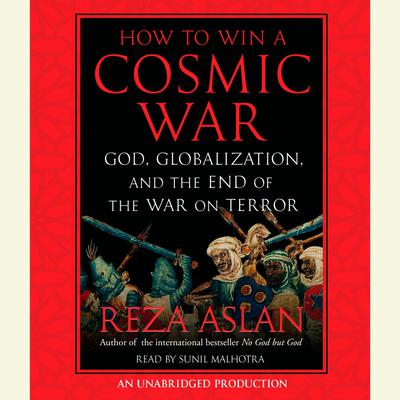 How to Win a Cosmic War (Digital Audiobook)

God, Globalization, and the End of the War on Terror

A cosmic war is a religious war. It is a battle not between armies or nations, but between the forces of good and evil, a war in which God is believed to be directly engaged on behalf of one side against the other.

The hijackers who attacked the United States on September 11, 2001, thought they were fighting a cosmic war. According to award-winning writer and scholar of religions Reza Aslan, by infusing the United States War on Terror with the same kind of religiously polarizing rhetoric and Manichean worldview, is also fighting a cosmic war–a war that can’t be won.

How to Win a Cosmic War is both an in-depth study of the ideology fueling al-Qa‘ida, the Taliban, and like-minded militants throughout the Muslim world, and an exploration of religious violence in Judaism, Christianity, and Islam. Surveying the global scene from Israel to Iraq and from New York to the Netherlands, Aslan argues that religion is a stronger force today than it has been in a century. At a time when religion and politics are increasingly sharing the same vocabulary and functioning in the same sphere, Aslan writes that we must strip the conflicts of our world–in particular, the War on Terror–of their religious connotations and address the earthly grievances that always lie behind the cosmic impulse.

How do you win a cosmic war? By refusing to fight in one.

Reza Aslan is assistant professor of creative writing at the University of California, Riverside, and senior fellow at the Orfalae Center for Global & International Studies at UC Santa Barbara. His first book, No god but God, has been translated into thirteen languages and was short-listed for the Guardian First Book Award.