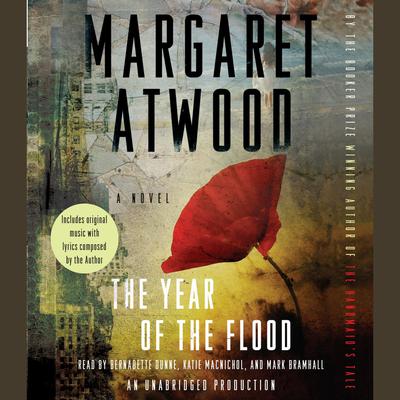 The Year of the Flood (MaddAddam Trilogy) (Digital Audiobook)

The long-awaited new novel from Margaret Atwood. The Year of the Flood is a dystopic masterpiece and a testament to her visionary power. The times and species have been changing at a rapid rate, and the social compact is wearing as thin as environmental stability. Adam One, the kindly leader of the God's Gardeners—a religion devoted to the melding of science and religion, as well as the preservation of all plant and animal life—has long predicted a natural disaster that will alter Earth as we know it. Now it has occurred, obliterating most human life. Two women have survived: Ren, a young trapeze dancer locked inside the high-end sex club Scales and Tails, and Toby, a God's Gardener barricaded inside a luxurious spa where many of the treatments are edible.Have others survived? Ren's bioartist friend Amanda? Zeb, her eco-fighter stepfather? Her onetime lover, Jimmy? Or the murderous Painballers, survivors of the mutual-elimination Painball prison? Not to mention the shadowy, corrupt policing force of the ruling powers . . .Meanwhile, gene-spliced life forms are proliferating: the lion/lamb blends, the Mo'hair sheep with human hair, the pigs with human brain tissue. As Adam One and his intrepid hemp-clad band make their way through this strange new world, Ren and Toby will have to decide on their next move. They can't stay locked away . . .By turns dark, tender, violent, thoughtful, and uneasily hilarious, The Year of the Flood is Atwood at her most brilliant and inventive.

Margaret Atwood is the author of more than forty books of fiction, poetry, and critical essays. Her novels include The Handmaid's Tale, Cat's Eye, Alias Grace, Oryx and Crake, and The Blind Assassin, which won the Man Booker Prize. In 2008 she was awarded Spain's Prince of Asturias Prize for Literature.