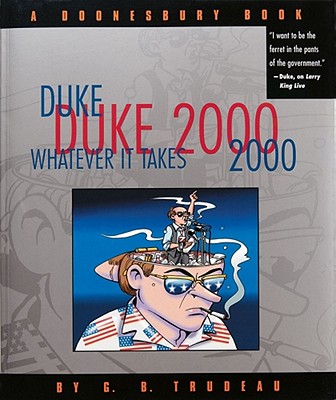 Whatever It Takes: A Doonesbury Book

Doonesbury continues to entertain, inspire, and provoke with its unique blend of social commentary, humor, and political satire.  Chronicling the millennial state of the nation through the interconnected lives of its large cast of characters, the strip offers unusual perspectives on the usual suspects, and asks impertinent questions on the pertinent subjects of the day. In Duke 2000: Whatever It Takes Trudeau's Pulitzer Prize-winning strip tracks the end of an Internet start-up and the beginning of a gay marriage, the revival of an aging rocker's career -- and the complete reinvention of the irrepressible Uncle Duke. In a presidential primary campaign attracting the likes of Warren Beatty and Donald Trump, perhaps it was not surprising that the former ambassador to China decided to throw his bandana into the ring.