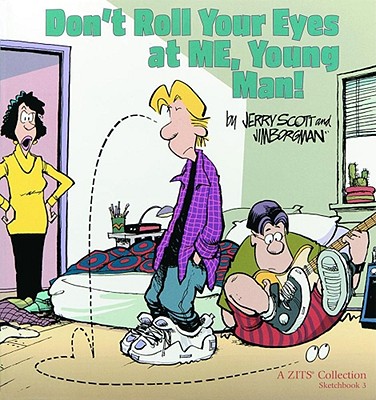 Don't Roll Your Eyes at Me, Young Man!

In Zits, countless readers relish Jim Borgman and Jerry Scott's right-on look at teenage life, as told through the eyes of perpetually ambivalent, yet lovable, teenager Jeremy Duncan. Here's a 15-year-old kid who seems to speak for teenagers everywhere, even if it's with a withering look or a nonchalant shrug. As Jeremy himself might say: "Adolescence bites!"

Zits has attracted an enormous following of fans, teenagers and adults alike. This Zits sketchbook, Don't Roll Your Eyes At Me, Young Man!, warmly chronicles the growing pains of the Duncan household and follows Jeremy as he navigates his way through his perpetual freshman year of high school. Caring, funny, impatient, self-absorbed, and bored silly, Jeremy is the charming essence of adolescence today.


Co-creator Jim Borgman and his wife are the proud parents of five children. He has also won a Reuben Award and a Pulitzer Prize. Both he and Jerry have LOTS of experience with teenagers.
or support indie stores by buying on
(This book is on backorder)