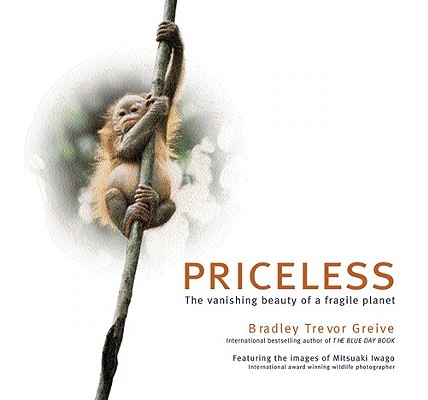 The Vanishing Beauty of a Fragile Planet

Mitsuaki Iwago's gorgeous photographs of adorable endangered animals accompanied by Bradley Trevor Greive's impassioned plea for environmental consciousness and sprinkled with facts and figures on humans' steady corruption of the earth in Priceless.

There may be no more effective argument against environmental devastation than gorgeous photographs of adorable endangered animals--and this book is packed with them, accompanied by heartfelt entreaties about the looming extinction of dozens of species.

Australian author Bradley Trevor Greive writes an impassioned plea for environmental consciousness that glides between poetic ("you are the whole world, not just the space inside your clothes") and matter-of-fact ("It seems clear that our species is destined to be the cause of the sixth extinction"). The accompanying pictures by wildlife photographer Mitsuaki Iwago are captivating snapshots of disappearing animal worlds: a lion cub resting at sunset on the savanna, an elephant advancing across a plain while hundreds of white birds fly up before him.

Greive and Iwago explore the interconnectedness and similarity of all life, but carefully avoid assigning human characteristics to the animals. And humans will reap what they sow, Grieve warns: "Only now are we learning that just as we made life unbearable of the many delicate species we have lost, so too we are slowly but surely making this planet unsuitable to sustain even our own existence." Grieve's simple, spare prose, which rarely measures more than a sentence or two per page, is sprinkled with facts and figures on humans' steady corruption of the earth.

No reader will close the book unmoved by the beautiful, funny, and strange creatures in its pages. Amplifying this poignant call for action, Greive is donating all author proceeds from book sales to the Taronga Foundation, a wildlife conservation charity.

Since the debut of his international bestseller The Blue Day Book, Bradley Trevor Greive has become a household name in more than 115 countries. A former Australian paratrooper, BTG left the army to pursue more creative misadventures. He has been bitten by wild monkeys and rabid bats and was accepted into Russia's cosmonaut training program--though those incidents were, by and large, unrelated. BTG spends most of his time in a tiny Tasmanian hamlet.

Mitsuaki Iwago is among the world's foremost wildlife photographers. For over 20 years he has taken award-winning images in more than 70 countries, and his work has appeared in numerous magazines, including National Geographic. He is the author of over a dozen books, including the worldwide best-sellers Serengeti: Natural Order on the African Plain, Mitsuaki Iwago's Whales, Mitsuaki Iwago's Kangaroos, Mitsuaki Iwago's Penguins, and In the Lion's Den. He presently lives in Japan.
Loading...
or support indie stores by buying on