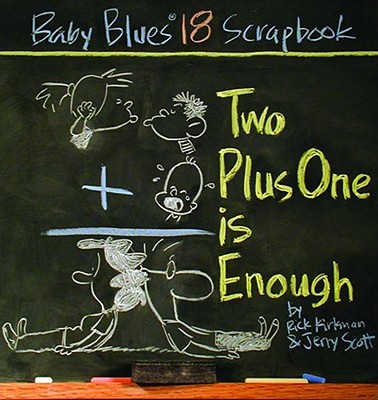 Two Plus One Is Enough

Baby Blues is simply our lives on paper. At times it seems more like a home video than a comic strip."

By their third child, most folks have parenting figured out and could teach Dr. Spock a thing or two. Yeah, right! Baby Blues is back with even more of the hilarious trials and tribulations of the growing young MacPherson family.

Two Plus One Is Enough is another collection of this stupendously popular comic strip, which has millions of fans.

Baby Wren is raising the chaos level in the MacPherson household to a new high as Zoe and Hammie compete as only siblings can. Parents Darryl and Wanda somehow keep up their good humor despite a tight budget, their mischievous but adorable older children, and a wailing infant. Precocious Zoe's learning to read-and to point out the inconsistencies in children's books. (For example, after Zoe reads about a bear, Wanda corrects her. "That word is dog, not bear." Zoe, however, astutely observes that the picture looks like a dog: "So which is spelled right? The word or the picture?" Zoe asks.) And Hammie must make sure his baby sister isn't gaining on him, in age or in weight.

Two Plus One Is Enough offers plenty of laughs from one of America's favorite families.


Rick Kirkman's work on Baby Blues has delighted fans and wowed the cartooning world since he launched the strip with Jerry Scott in 1990. Rick lives in Phoenix, Arizona.

Online: babyblues.com
Loading...
or
Not Currently Available for Direct Purchase