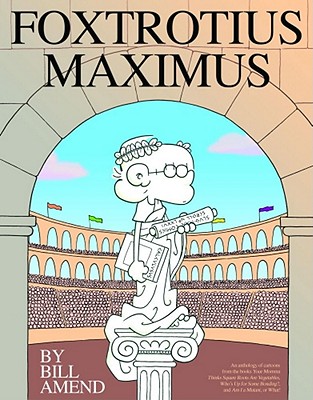 If they would have sold FoxTrotius Maximus at the Colosseum the gladiators could have taken the day off. After all, the friends, Romans, and countrymen would have been too busy laughing over Jason Fox, pictured in full toga-and-laurel regalia on the cover. This Foxtrot treasury will delight and amuse Fox family fans in the same surprising way. Thumbs up-once again-for creator Bill Amend!

Jason Fox rules . . . his computer code, at calc and trig, and in whatever fantasy he happens to be headlining at the moment. Just because the rest of the Fox family-from older brother Peter and sister Paige to parents Roger and Andy-haven't quite accepted his Dominion Over All isn't cause for concern. Math geeks, Jason is convinced, will govern the earth, and he will lead the way. FoxTrotius Maximus: A FoxTrot Treasury, picks up on Jason's megalomania and runs with it . . . and it doesn't stop until you are out of breath from laughing so hard.

FoxTrotius Maximus combines the works Your Momma Thinks Square Roots Are Vegetables, Who's Up for Some Bonding, and Am I a Mutant or What? That means longtime FoxTrot readers and new fans alike are treated to Jason and his friend Marcus's never-ending antics, Andy's ongoing allergy fun, Peter's latest hot haircut, and a host of pop-culture trends and topics including music piracy, video games, and The Lord of the Rings trilogy. Timely, topical, and terribly funny!

Bill Amend was named Outstanding Cartoonist of the Year by the National Cartoonists Society in 2007. He creates FoxTrot cartoons for Sunday newspapers and maintains an online presence at foxtrot.com. He lives in the Midwest.
Loading...
or support indie stores by buying on
(This book is on backorder)