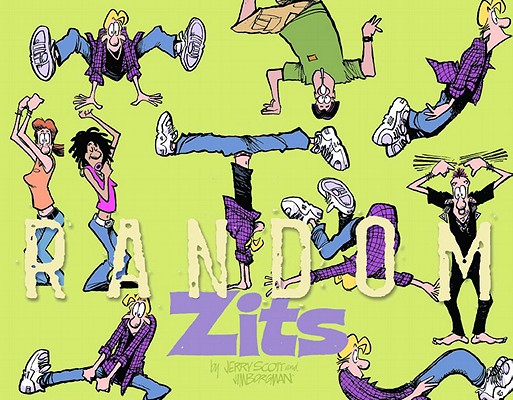 Zits follows the life of 15-year-old Jeremy Duncan, a sarcastic, cynical, sensitive, intelligent, typical kid. As Jeremy navigates life with his parents, girlfriend Sara, and buddies Pierce and Hector, he embodies all the characteristics unique to the weirdest, toughest, and most intense time most guys ever face: the teen years. He endures it all, armed with little more than a wry, penetrating sense of humor, a sullen expression, and a guitar named Larry.

Random Zits not-so-randomly combines the previous collections Road Trip! and Teenage Tales into one mega-volume. It features popular story lines that include Jeremy and Hector fixing up their old van and taking it for a clandestine joy ride, Jeremy learning the value of tact on his girlfriend's bad hair days, selling random household items on eBay, surviving sudden radical growth spurts, and being coaxed into a fishing trip with his father, who seizes the opportunity to have "the talk."

Zits captures the nature of teenage boys with uncanny precision. In one series of strips, Jeremy's mom is alarmed to find a fist-size hole in the wall of his room. When he reluctantly describes what happened, it turns out that the hole wasn't made in a moment of teen hormonal rage, but in a moment of teen hormonal idiocy, when he used his mom's meat tenderizing mallet to swat a bug. Anyone who has spent much time around an adolescent boy will recognize this seemingly inexplicable behavior: intelligence and impulsiveness locked in constant battle. This is the natural state of the teenage male, and it's portrayed exquisitely in Zits.

Jerry Scott is the co-creator of the award-winning comic strip Zits. He lives in central coastal California. Jerry's work on Baby Blues has delighted fans and wowed the cartooning world since he launched the strip with Rick Kirkman in 1990.
or
Not Currently Available for Direct Purchase