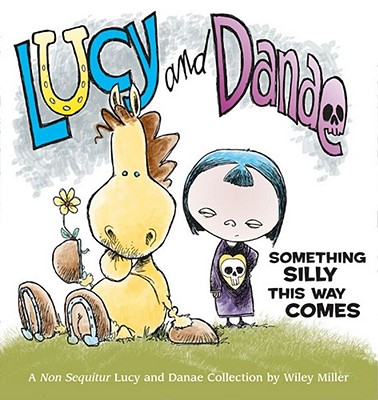 It is a rare cartoonist who can introduce new characters into a successful strip without upsetting readers. But since Wiley introduced Lucy, the lovable Pygmy-Clydesdale-with-an-attitude as the companion to Danae, Non Sequitur's cynical anti-heroine, fans have been clamoring for more of the pair. Now readers can enjoy the adventures of Lucy and Danae in the Non Sequitur collection dedicated to their exploits, Lucy and Danae: Something Silly This Way Comes.

Lucy's lovable equine goofiness tempers Danae's overdeveloped cynicism as Danae struggles with school, her father, and her sunny little sister, Kate. World-weary beyond her years, Danae sports a skull-in-heart T-shirt and perpetual scowl, while Lucy embodies unbridled optimism with her horsey grin. From their first meeting at summer camp, to Danae's "sneaky yet noble" plot to train Lucy as a guide horse for the blind (they do exist!), to an unplanned expedition to Santa's Workshop (in Maine, not the North Pole), Danae and Lucy turn the cliche of a sentimental girl and her horse upside down and inside out. With Lucy and Danae, Wiley Miller has found a winning combination that readers can't resist.

Wiley Miller began his career as a political cartoonist in 1976, and his incisive drawings have won him several honors, including, in 1991, the prestigious Robert F. Kennedy Journalism Award. He moved to Iowa City, Iowa, in 1992 to devote his full-warped attention to "Non Sequitur. Non Sequitur" is the only cartoon to win National Cartoonists Society awards in both the comic strip and comic panel categories, and Wiley Miller is the only cartoonist to win a Reuben in his first year of syndication.
or
Not Currently Available for Direct Purchase
Copyright © 2020 American Booksellers Association