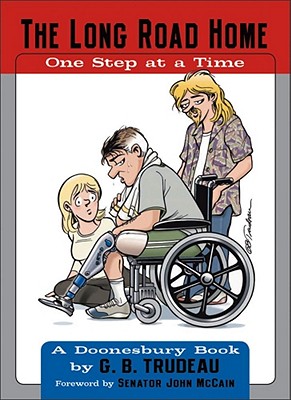 One Step at a Time (Doonesbury Books (Andrews & McMeel))

On a road outside Fallujah, an RPG blows apart a Humvee and upends the life of a former football star. As a medevac chopper swoops down, the wounded Guardsman hears "Not your time, bro. Not today," and his remarkable healing journey begins. Thousands of U.S. soldiers have suffered grievous wounds in Iraq, but only one of them is a Doonesbury character. The Long Road Home: One Step at a Time chronicles seven months of cutting-edge cartooning, during which B.D.-and readers of the strip-got an up-close schooling in a kind of personal transformation no one seeks. Deprived not only of leg but also his ubiquitous trademark helmet, B.D. survives first-response Baghdad triage, evacuation to Landstuhl's surgeon-rich environment, and visits by innumerable morale-boosting celebs, both red and blue in hue. He's awed in turn by morphine, take-no-guff nurses, his fellow amps, and his family, including the daughter who hand-delivers succor, one aspirin at a time. Transferred stateside to Walter Reed's Ward 57, B.D. is inspired by the wisdom of physiatrists, warmed by the dedicated ministrations of real-life fellow-amp heroes like Jim the Milkshake Man, and dazzled by high-tech prostheses that cost more than luxury cars. He's annoyed by his own bouts with self-pity, by the bedside awkwardness of friends more comfortable regarding his stump from e-mail distance, and by Zonk's unwavering commitment to supplementing his care with organic meds. As their journey continues, B.D. and Boopsie are cared for by Fisher House, a home-next-door-to-the-hospital for families whose lives revolve around therapy. B.D. finds himself painfully engaged in building his future, one sadistically difficult physical therapy session at a time. "To Lash, Helga, and the Marquis " toast the band of differently limbed brethren, raising their glasses to their PT masters as they prepare for reentry into the ambulatory world. From rebuilding tissue to rebuilding social skills to rebuilding lives, B.D's inspiring, insightful, and darkly humorous story confirms that it can take a village, or at least a ward, to raise a soldier when he's gone down. "Thank you for getting blown up," offers one of B.D.'s visiting players. Replies the coach, "Just doing my job.