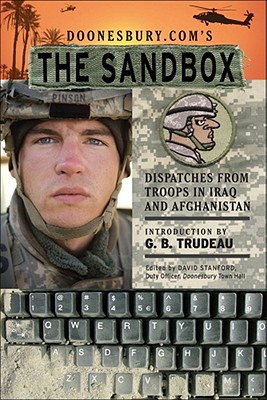 Dispatches from Troops in Iraq and Afghanistan

Launched as a military blog (or "milblog") by Doonesbury creator Garry Trudeau in October 2006, The Sandbox is an online forum through which service members in Afghanistan and Iraq share their stories with readers here at home. In hundreds of fascinating and compelling posts, soldiers write passionately, eloquently, and movingly of their day-to-day lives, of their mission, and of the drama that unfolds daily around them.

A dog adopts a unit on patrol in Baghdad and guards its flank; a soldier chronicles an epic day of close-call encounters with IEDs; an Afghan translator talks earnestly with his American friend about love and theology; a dad far from home meditates on time and history in the desert night under ancient stars; a Chuck Norris action figure witnesses surreal moments of humor in the cramped cab of a Humvee --Doonesbury.com's The Sandbox: Dispatches from Troops in Iraq and Afghanistan presents a rich outpouring of stories, from the hilarious to the thrilling to the heartbreaking, and helps us understand what so many of our countrymen are going through and the sacrifices they are making on our behalf.

* I really feel like most people look at this war as little more than a television event. How many have ever taken the time to stop and think about what we go through every day over here? The bullets, rockets, and IEDs are not the hard part. The hard part is knowing that life goes on back at home. --FC1 (SW) Anthony McCloskey

* The man looks at me, his jaw working in anger. For a brief second, I get the impression that he is going to attack, and then suddenly, as if the energy has gone out of him, his shoulders slump slightly and he looks down at his brother's body. --1LT Adam Tiffen

* Out here in the desert, Time is King; the minutes are his minions and the months his sabers by which you are knighted. The King controls all that you do, when you come and go, and how long until you see your children. --Capt. Lee Kelley