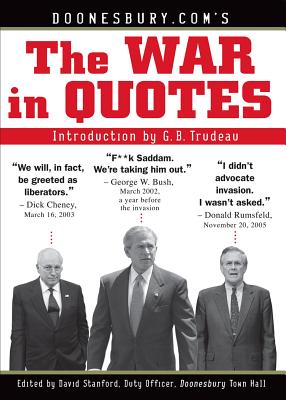 Doonesbury.com's The War in Quotes

Doonesbury.com's The War in Quotes is a startling account of the Iraq War, told entirely in the words of those who conceived, planned, advocated, and executed it. Presented in chronological order in thematic groups against a timeline of key events, this astonishing record of remarks both public and private speaks for itself, chronicling the dramatic unfolding of America's first preventative war.

"If the president wants to go to war, our job is to find the intelligence to allow him to do so." --Alan Foley, director, CIA Weapons Intelligence, to staff, December 2002

"There was no guidance for restoring order in Baghdad, creating an interim government, hiring government and essential services employees, and ensuring that the judicial system was operational." --3rd Infantry Division's official after-action review