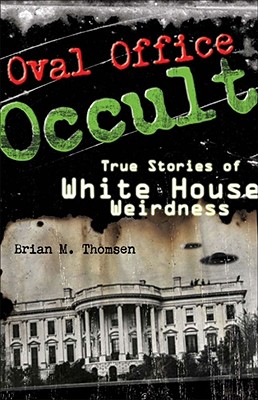 An entertaining and informative look at our paranormal presidencies." --Bill Fawcett, author of Oval Office Oddities

The Discovery Channel's A Haunting meets the History Channel's The Presidents inside this collection of strange-but-true tales of White House weirdness.

Brian M. Thomsen offers a series of nonpartisan accounts of spirits, specters, and supernatural beliefs by and about those who have inhabited the White House. Readers will learn which U.S. presidents have claimed to encounter UFOs, and which have been connected to ghosts, as well as which of our nation's leaders have consulted with fortune-tellers or otherwise been associated with other aspects of the occult.

Famous subjects include Warren G. Harding and the curse of the Hope Diamond, the uncanny similarities between the lives and deaths of John F. Kennedy and Abraham Lincoln, George Washington's visions, Ronald and Nancy Reagan's reliance on psychics, the haunted homes of Dolly Madison and Rosalyn Carter, Jimmy Carter's UFO sighting, Hillary Clinton's experience with channeling, the mysterious curse of Tecumseh, the secret societies of presidents, and much more.

Brian M. Thomsen is the author of more than 12 books and has edited more than 15 anthologies and collections. He resides in Brooklyn, NY.

Writer Cynthia Nims is a lifelong Northwesterner, the author of over 10 cookbooks and a contributor to Cooking Light, Alaska Airlines Magazine, Seattle and other magazines. Her blog, Mon Appo(c) tit, can be found atwww.cynthianims.com/blog.

Rick Kirkman and Jerry Scott\u2019s work on Baby Blues has delighted fans and wowed the cartooning world since the pair launched the strip in 1990. Rick lives in Phoenix, Arizona. Jerry, also the cocreator of the award-winning comic strip Zits, lives in central coastal California. Online: babyblues.com"
Loading...
or
Not Currently Available for Direct Purchase