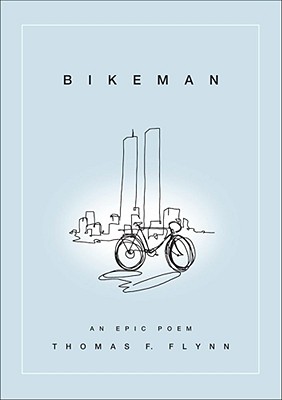 “Thomas Flynn has captured succinctly and poignantly the 'forever September morning' we all remember--9/11. As the epic poem it is, Bikeman should be remembered for years to come.”
— Dorothy Dickerson, Books & More of Albion, Albion, MI
View the List

On September 11, 2001, journalist Tom Flynn set off on his bike toward the World Trade Towers not knowing what he was riding into. Bikeman is one man's journey back to the horrors of that day and to the humanity that somehow emerged from the dust and the death. Both heartbreaking and haunting, his words will stay with you like that 'forever September morning.'" --Meredith Vieira, NBC's Today

Tom Flynn brings to his subject three invaluable attributes: the eye of a seasoned journalist, the soul of a poet, and his stunning, first-hand experience of that horrific day." --David Friend, Vanity Fair

From Bikeman:
The dead from here
are my forever companions
I am their pine box,
their marble reliquary,
their bronze urn,
the living, breathing coffin they never had,
their final resting place without a stone.
I move on at peace.

Modeled on Dante's Inferno, veteran journalist Thomas Flynn's Bikeman chronicles the morning of September 11, 2001 like no other published work. Flynn delivers a personal account of his experiences beginning with the first strike on the World Trade Center when he decided to follow his journalist's instinct and point his bike's handlebars in the direction of the north tower. His story continues as he transitions from reporter to participant hoping to survive the fall of the south tower. Now Flynn, as both journalist and now survivor, must come to terms with the harrowing ordeal and somehow find peace in the very act of surviving.

Part journalist's record, part survivor's eulogy, Flynn writes:
Survival is the absence of death.
It is a subdued, a hushed existence. . .
I live to talk about it,
to relate the tale as it happens,
not only its extremities and cruelty,
but also the goodness that flourishes too.

Thomas Flynn is an award-winning television producer and writer. He explains that the style of this book formed as he re-read Dante's Inferno and began to realize how "the parallel worlds of his journey to hell and mine ran together." Flynn is married to Nancy Reardon and has a daughter, Kate. He divides his time between downtown New York City and Cape Cod.
or
Not Currently Available for Direct Purchase
Copyright © 2020 American Booksellers Association