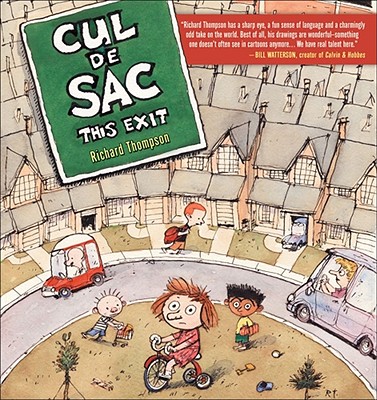 "I hope you enjoy Cul de Sac as much as I do. I think you're in for a real treat." --Bill Watterson, creator of Calvin and Hobbes, 2008

"One of the five best features in any newspaper, period." --The Comics Reporter

"One of the few strips around where nearly every individual panel is stand-alone delight." --The Onion

"...it really seems like the inheritor of 'Calvin and Hobbes.'" --Art Spiegelman

"I can't say enough in his favor, so much is my admiration for his work." --Pat Oliphant

More than half of our nation's population resides in the 'burbs. Knowingly, Richard Thompson's Cul de Sac follows the antics of four-year-old Alice Otterloop as she navigates her way through life at Blisshaven Preschool, "the scene of [her] daily toil." Suburbanites across the nation will easily recognize the quirks and conundrums associated with house-lined streets, sidewalk canvases, and magnetified refrigerator art.

Instructed by the proper Miss Bliss, Alice regularly has issues with taking a nap, speaking out of turn, and remembering what a triangle looks like. Helping her through life's ups and downs are her eight-year-old brother Petey, Dad (a.k.a. Peter), and Mom (a.k.a. Madeline), as well as Mr. Danders, the preschool's pompously pedantic guinea pig.

This is the strip's first book collection incorporating more than a year's worth of strips dating back to the cartoon's 2007 debut. Thompson has received critical praise for doing a masterful job of commenting on social issues while entertaining in a freshly amusing and unexpected way.

Richard Thompson is the creator of Cul de Sac and winner of the 2011 Reuben Award for Outstanding Cartoonist of the Year. His illustrations have appeared in numerous publications, including U.S. News & World Report, National Geographic, and The New Yorker. He announced in 2009 that he had been diagnosed with Parkinson's disease, and has since rallied other cartoonists and illustrators to contribute to the Team Cul de Sac project to benefit the Michael J. Fox Foundation. In September 2012, Thompson retired from creating Cul de Sac.

richardspooralmanac.blogspot.com
or support indie stores by buying on
(This book is on backorder)
Copyright © 2020 American Booksellers Association