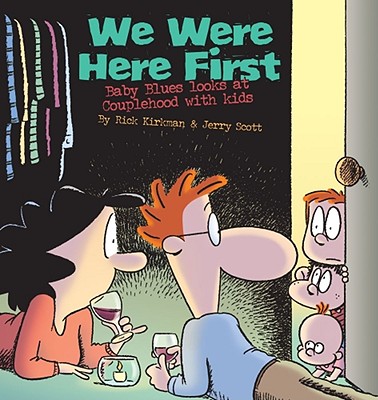 We Were Here First

We Were Here First, an entertaining collection of Baby Blues comic strips handpicked by cocreators Rick Kirkman and Jerry Scott, focuses on the relationship between Darryl and Wanda MacPherson--before and after parenthood turns their life upside down.

A love story set in the trenches of child rearing, We Were Here First follows the account of Darryl and Wanda earning their stripes as parents to their three children--the headstrong Zoe, easygoing Hammie, and baby Wren--all the while trying to make time for themselves, even if it's a mere 30 stolen seconds!

An amusing story of a domestic romance caught in the middle of a fun-filled family feud, We Were Here First will delight both longtime fans of Baby Blues as well as readers of all ages new to this beloved comic strip.

Jerry Scott is the co-creator of the award-winning comic strip Zits. He lives in central coastal California. Jerry's work on Baby Blues has delighted fans and wowed the cartooning world since he launched the strip with Rick Kirkman in 1990.
Loading...
or support indie stores by buying on
(This book is on backorder)