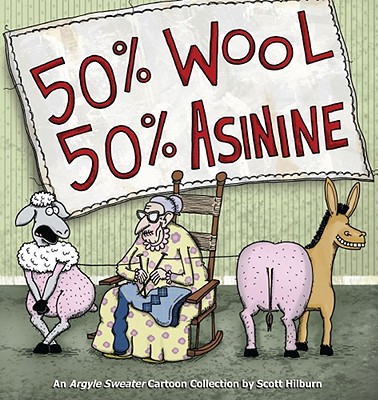 The Argyle Sweater is one of the fastest-growing syndicated comic strips in recent years. Launched online in 2007, it quickly was picked up by 130 newspapers all over the country, including the New York Daily News, the Washington Post,the Los Angeles Times, the Detroit Free Press, the Seattle Times, and the Portland Oregonian, as well as a host of online sites.

Since launching as an online feature in 2006, The Argyle Sweater has cemented its reputation as the comic strip for fans of absurd, clever humor. Now, cartoonist Scott Hilburn has collected the best of his 2009 strips in 50% Wool, 50% Asinine.

Coming from The Argyle Sweater's customary skewed perspective, the comic strips collected in 50% Wool, 50% Asinine will delight readers with the puns (both verbal and visual) and cerebral wit that are the hallmarks of this hilarious strip.

A true fan favorite, The Argyle Sweater has gathered a loyal and enthusiastic following with origins that even predate its hugely successful launch with Universal Press Syndicate. Funny, irreverent, smart, and entertaining, 50% Wool, 50% Asinine is perfect for devoted fans of the strip and a great introduction for those lucky enough to get to experience for the first time this intelligent comic strip infused with childlike imagination.

Born in Dallas, Texas, Scott Hilburn has degrees in digital arts and psychology. He quit his job as a Flash developer, now works full-time on his comic strip. He lives in Frisco, Texas.
or
Buy Here
Copyright © 2020 American Booksellers Association