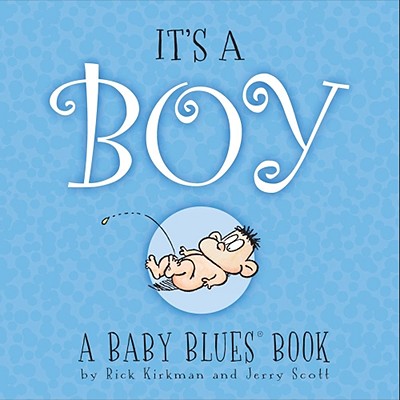 This baby gift book features the artwork from the popular and award-winning Baby Blues comic strip. The authors have selected the definitive strips that shaped the lives of their characters when they added a little boy to their family. It’s a Boy will delight moms, moms-to-be, and any sister forced to deal with a new baby boy in the house.

Have a new baby in the house? Know somebody who's expecting? This is the gift book you're looking for. Ripped from the internationally popular comic strip Baby Blues and selected by Jerry Scott and Rick Kirkman, these are the definitive strips that shaped the lives of the Baby Blues characters when they added children to the family.

In It's a Boy, three-year-old Zoe MacPherson goes from exalted only child to, ugh, older sibling when her parents, Darryl and Wanda, bring home baby Hamish (nicknamed Hammie). With her domination of the MacPherson household challenged by this cheerful intruder, the precocious Zoe is forced to cope with the harsh reality of sharing attention--and everything else!

It's a Boy will delight moms, moms-to-be, and any family member lucky enough to deal with a new baby.