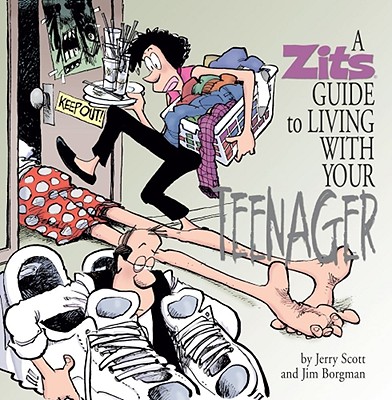 A Zits Guide to Living With Your Teenager

An indispensible and entertaining manual for parents on the verge of having a teenager, by America’s favorite cartoon team.

In their award-winning comic strip Zits, artist Jim Borgman and writer Jerry Scott have succeeded in creating one of the most poignant, realistic, and funny portrayals of a teenager found in any medium today. Parents themselves, Borgman and Scott have learned a thing or two along the way in their creative and family lives. The result is A Zits Guide to Living with Your Teenager.

A combination of select Zits comic strips depicting the relationship between teenager Jeremy Duncan and his parents, Walt and Connie, and witty, knowing, and dead-on commentary from Borgman and Scott, A Zits Guide to Living with Your Teenager is an indispensible and entertaining manual for parents on the verge of having a teenager.

Jerry Scott is the co-creator of the award-winning comic strip Zits. He lives in central coastal California. Jerry's work on Baby Blues has delighted fans and wowed the cartooning world since he launched the strip with Rick Kirkman in 1990.
or support indie stores by buying on