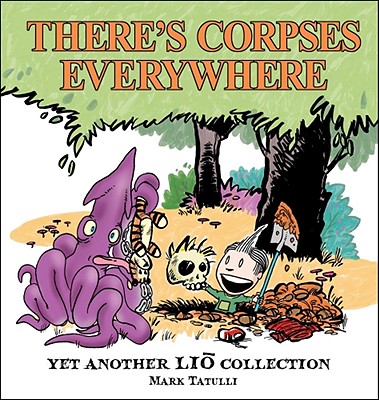 Yet Another Lio Collection

Emmy award-winning animator and producer Mark Tatulli’s comic strip LiÃ³ is dark, twisted, visually stunning and totally irresistible. LiÃ³ is a curios scientist, a comic-book fan, defender of the defenseless and creator of an army of robot zombie bunnies—all without saying a word.

The result of Tatulli's creativity is a mind-bending, comical, and astute journey into the darkly detailed world of spiky-haired Lio, a curious young scientist and comic book fan whose daydreams embark from the dark chasm where wit and sarcasm collide.

Defender of the defenseless and the inventor of a legion of zombie bunnies, Lio is joined in his day-to-day exploits by his exasperated and sleep-deprived father, a pet snake named Frank, a squid named Ishmael, and various imaginary robots and creepy, crawly monsters. Within this humorously macabre framework of sarcasm, parody, and high jinx, sidesplitting laughter abounds--all without so much as a word.

Mark Tatulli, who was first known for his Heart of the City comic strip, took on Lio as an outlet for his dark and twisted humor. In addition to his cartooning experience, Tatulli is also an accomplished filmmaker and animator, and is the recipient of three Emmy awards for his television work. Mark currently resides in New Jersey with his wife, son, and two daughters. His children are the true joy of his life and the inspiration for much of his comic artwork.