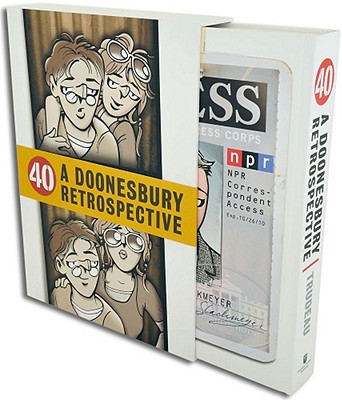 Long regarded as THE political touchstone cartoon of its era, Garry Trudeau’s Doonesbury celebrates its fortieth anniversary in this beautifully produced retrospective.On October 26, 1970, the first Doonesbury comic strip appeared, as college jock B.D. met his inept and geeky roommate, Mike Doonesbury. Over the months that followed, they were joined by campus radical “Megaphone Mark,” Boopsie, Zonker, and on and on. Fourteen thousand strips later, the world of Doonesbury has become a unique and remarkable creation, sustained by a vast and intricately woven web of relationships among 40 major characters, spanning three generations. While chronicling his characters’ entanglements and intimacies, G. B. Trudeau developed a keen satirical commentary that has ambitiously and relentlessly carved out an indelible record of four decades of American social and political history. The comic strip, like jazz and rock and roll, is an American form, and Trudeau has expanded it boldly and fearlessly, taking it into new realms. An epic unfolding, the Doonesbury saga constantly entices readers to keep up with its ever-evolving cast and endlessly inventive story lines. Trudeau remains fully engaged in the creation of his far-from-complete magnum opus. This massive yet elegant anniversary volume marks the strip’s fourth decade by examining in depth the characters and relationships that have given Doonesbury such vitality and resilience, and allowed it to constantly reinvigorate itself. The book opens with an in-depth introductory essay by G. B. Trudeau in which he surveys his sprawling creation as only he could, followed by brief word-and-picture portraits of all the principle players. The collection’s core consists of more than 1,800 beautifully displayed strips—dailies and Sundays—that chart key adventures and cast connections over the last four decades. Dropped in throughout this rolling narrative are 20 detailed essays in which Trudeau contemplates individual characters or bonded groups of characters, including portraits of ur-folk such as Duke and Honey, Zonker, Joanie, and Rev. Sloan, as well as those who have joined the cast more recently, such as Zipper, Alex, and Toggle. The centerpiece of the volume is a four-page foldout diagram that maps in great and annotated colorful detail the mind-boggling matrix of character relationships. A feast of storytelling and a clarifying overview, this celebratory tome offers a unique way to experience one of the greatest comic strips ever.

Created by the team that brought you The Complete Far Side and The Complete Calvin and Hobbes, this massive-yet-elegant celebratory anthology marks Doonesbury's 40th anniversary by examining in depth the characters that have given the strip such vitality.

On October 26, 1970, college jock B.D. met his inept and geeky roommate, Mike. Fourteen thousand strips later, the world of Doonesbury has grown uniquely vast, sustained by an intricately woven web of relationships--over 40 major characters spanning three generations. This book opens with an in-depth essay in which G. B. Trudeau surveys his sprawling creation as only he could. The volume's 1,800 beautifully displayed strips chronicle the key adventures and path crossings of the ever-evolving cast, from ur-characters such as Zonker, Joanie, Duke, and Honey, to relative newcomers such as Zipper, Alex, and Toggle. Dropped in throughout are 18 detailed essays in which Trudeau contemplates individual characters and groups of characters.

The book's literal centerpiece is a four-page foldout that maps in annotated detail the mind-boggling matrix of relationships. A feast of storytelling and a clarifying overview, 40: A Doonesbury Retrospective offers a unique way to experience one of the greatest comic strips ever.

Praise For 40: A Doonesbury Retrospective…

“Trudeau has just kept improving, year after year, in part because he stays so close to changing events… A great modern American history course could be taught using this volume of collected strips, stretching from Watergate to Afghanistan.”

“As one thumbs through the book - which Trudeau edited by culling more than 14,000 strips - it is near-impossible not to be struck anew by the weight of the comic's achievement in storytelling: Beyond the biting politics and topical commentary, "Doonesbury" at 40 reads like a novel told one poignant punch line at a time. As if by stringing together four decades of one-a-day calendars, the cumulative effect was Joyce.”

“Trudeau’s creation, which started as a jokey commentary on campus life at Yale, has evolved into a sprawling masterwork with a cast of characters big enough to make Tolstoy wonder if he was trying hard enough.”

“This is the perfect gift for anyone who is half-decent in any way. How could anybody not want it? ... Mr. Trudeau has become perhaps our nation's most important real-time historian; playing a role in sanity-saving not unlike Jon Stewart but not only before his time, but for four straight decades...”

"It's no exaggeration to say that Trudeau revolutionized the funny pages, creating a space where reactionaries and radicals alike squabble over the issues of the day."

"...Packs four decades of cartoonist Garry Trudeau's subversive genius into an oversize, 695-page hardcover. What else is guaranteed to make you think, feel nostalgic, and laugh out loud at least once a page?"?

“Doonesbury has been loved and hated because it has candidly and often hilariously skewered social mores and politics. Thanks to a crew of lovable, dynamic if not always clearheaded characters, Doonesbury is still a vital part of the national discussion.”

“Garry Trudeau’s “Doonesbury” turns 40 this month. To call it satire is only half right. “Doonesbury” has taken on all the topics you’d expect—from Vietnam to Iraq, from drug use to gay marriage. But satire has a short shelf life. “Doonesbury”?’s big heart and moral compass are what give it staying power.”