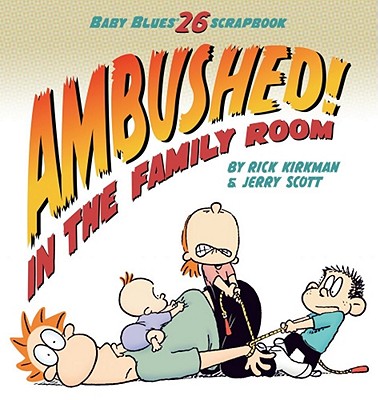 Ambushed! In the Family Room

From the dark days of sleep deprivation to the cacophony of a trikid family, Baby Blues has been revealing the true dark underbelly of parenting to the delight of newspaper readers everywhere. Like a comic epidural, or butt cream on a raging diaper rash, this comic strip has helped take some of the sting out of parenting for countless parents around the world.

Baby Blues transcends the comic page by fusing the award-winning imaginations of Rick Kirkman and Jerry Scott with familiar family life. Inside Ambushed! In the Family Room, Kirkman and Scott intuitively balance the humorous with the poignant through relatable and sometimes all-too-familiar parenting scenes.

Jerry Scott is the co-creator of the award-winning comic strip Zits. He lives in central coastal California. Jerry's work on Baby Blues has delighted fans and wowed the cartooning world since he launched the strip with Rick Kirkman in 1990.
or
Not Currently Available for Direct Purchase