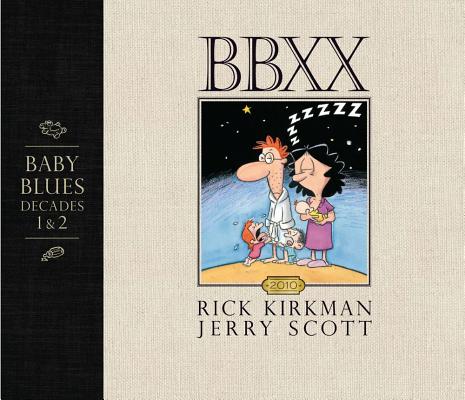 A special 20th anniversary hardcover Baby Blues retrospective, this is the colossal collection that Baby Blues’s 55 million-plus fans have been clamoring for.

BBXX is a hefty, hardcover treasury highlighting 20 years of Baby Blues, one of the most popular comic strips in history.  A comprehensive and commemorative edition of all things Baby Blues, creators Rick Kirkman and Jerry Scott share personal reflections and never-before-published essays, drawings, and photographs, along with almost 800 of the best Baby Blues strips from the last two decades.
Named Best Comic Strip of the Year in 1995, Baby Blues follows young parents Darryl and Wanda MacPherson as they raise children Zoe, Hammie, and Baby Wren.  From temper tantrums to toilet training, everyday experiences that all parents agonize over and laugh about serve as fertile comedic ground as BBXX takes readers on a relevant and timeless journey through twenty years of Baby Blues. What results is a truthfully fulfilling romp through the daily aspects of family life as well as a carefully nuanced tug at the heartstrings.

Jerry Scott is the co-creator of the award-winning comic strip Zits. He lives in central coastal California. Jerry's work on Baby Blues has delighted fans and wowed the cartooning world since he launched the strip with Rick Kirkman in 1990.
or support indie stores by buying on