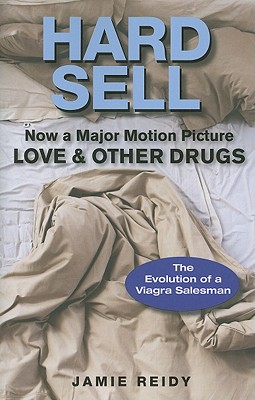 Now a Major Motion Picture LOVE and OTHER DRUGS

The first paperback edition of Reidy’s memoir describing his successful career in Big Pharma as Pfizer’s #1 salesmen during the launching of Viagra. Published to tie-in with Fox’s international movie release of the film Love and Other Drugs based on Reidy’s book and starring Jake Gyllenhaal and Anne Hathaway, Thanksgiving weekend 2010.

Jamie Reidy is the guy who's been there, done that, and walked away with the insider stories. Inside Hard Sell: Now a Major Motion Picture LOVE and OTHER DRUGS, you'll find yourself rooting for Reidy and shocked by the realities of the world that paid his salary.

This comedic expose traces Reidy's experiences from Pfizer training to life as the "V-Man," when Reidy became Pfizer's number-one drug rep during the Viagra craze. With equal parts self-confidence and self-mockery, Reidy takes the reader on a hilarious romp through pharma-culture while revealing the controversial side of the drug industry. From viewing a circumcision to gaining a doctor's rapport to providing insight on why doctors choose to prescribe Drug X over Drug Y, and from how to bargain "sigs" and "scripts" to why the Viagra pill is shaped as a diamond, Reidy discloses everything.

A witty, behind-the-scenes look at an industry that touches everyone in America with a prescription, Hard Sell uncovers truths about the pharmaceutical industry you'd rather not know and practices you'd like to believe weren't employed.

Hard Sell has been adapted into a major motion picture starring Jake Gyllenhaal and Anne Hathaway.

Jamie Reidy, a Notre Dame grad and a former U.S. Army officer, "carried the bag" for Pfizer from 1995 to 2000. He then spent five years with Eli Lilly's Oncology Division, where he discovered there are far fewer jokes about chemotherapy than Viagra. Reidy was fired by Eli Lilly soon after publication of Hard Sell. He has since published Bachelor 101: Cooking + Cleaning = Closing, a cookbook and lifestyle guide for idiot single guys just like him. He lives in Manhattan Beach, California, where he has written several screenplays. Now he needs to start selling them.
Loading...
or
Not Currently Available for Direct Purchase