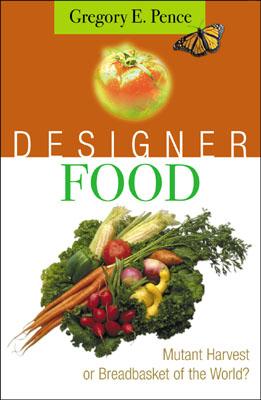 Mutant Harvest or Breadbasket for the World?

Absolutely everyone must eat. People decide several times a day what to eat and what not to eat, and the personal issue about genetically modified food is whether it is safe to eat--not only in the moment, but over the long-run. Designer Food addresses these and other pressing questions surrounding the ethics of genetically modified food in the premier, single authored commentary on the subject. Beginning with a thorough chronicling of GM Food's rise to fame first in England and later in North America, the book considers such issues as the symbolic importance of food, world hunger, food terrorism and sabatoge, and democratic public participation in the growing debate surrounding genetically modified food.

Gregory Pence is a medical ethicist with twenty years of experience reviewing significant cases in bioethics, and is professor in the School of Medicine and the Department of Philosophy at the University of Alabama. Pence has contributed to the New York Times, Wall Street Journal, Newsweek, and the Journal of the American Medical Association. He is the author of Classical Cases in Medical Ethics: Accounts of the Cases that Shaped Medical Ethics, 3rd edition (2000) and Who's Afraid of Human Cloning? (1998).
Loading...
or
Not Currently Available for Direct Purchase