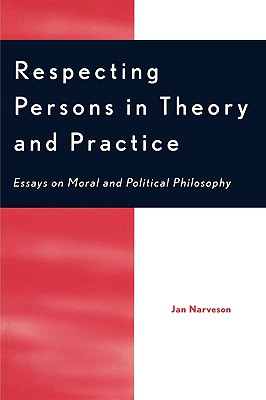 Essays on Moral and Political Philosophy

Respecting Persons in Theory and Practice is a collection of essays of the moral and political philosophy of Jan Narveson. The essays in this collection share a consistent theme running through much of Narveson's moral and political philosophy, namely that politics and morals stem from the interests of individual people, and have no antecedent authority over us. Rather, the source of such authority lies in the way people are related to one another, and most especially, in the exigencies of cooperation. Humans have plenty of problems, Narveson argues, but we are perhaps unique among animals in that our worst enemies, often enough, are other humans. The rules of morals and the devices of politics, in the view Narveson holds, deal with these problems by identifying the potential for gain from cooperation, and loss from the reverse. The essays express a collective antipathy for the ways in which modern political and moral philosophy has ridden roughshod over sane and efficient social restrictions, leaving us with a social scene devoted mainly to satisfying the cravings for power of the politically ambitious. Politics, Narveson argues with distress, has subverted morals. The essays in this collection, in various ways and as applied to various aspects of the scene, detail these charges, arguing that the ultimate and true point of politics and morals is to enable us to make our lives better, according to our varied senses of what that might mean.

Jan Narveson is professor of philosophy at the University of Waterloo in Ontario, Canada.
or
Buy Here
Copyright © 2020 American Booksellers Association