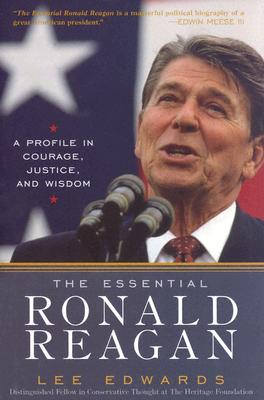 A Profile in Courage, Justice, and Wisdom

The Essential Ronald Reagan recounts--in a concise way--the extraordinary life and career of a great American president from his small-town Midwestern roots through his Hollywood film star days to his presidential role as redeemer of the American dream and victorious leader in the Cold War. Renowned historian Lee Edwards captures Ronald Reagan perfectly and concisely. Edwards shows how Reaganomics confounded the Keynesian "experts" and produced the longest period of peacetime economic expansion in U.S. history. he details how President Reagan won the Cold War without firing a shot--and reveals his "secret weapon" in summit negotiations with Soviet leader Mikhail Gorbachev. Calling upon his four decades of observing and analyzing Ronald Reagan, Edwards provides many intimate details about the last president--such as the five books that helped transform Reagan from a liberal Democrat into a conservative Republican and how the attempted assassination strengthened Reagan's deeply rooted faith. Edwards, who has taught politics at the Catholic University of America for nearly two decades, borrows from his classroom experience to grade the best and worst books about Ronald Reagan. Fifteen years after leaving the White House, Ronald Reagan is already ranked among our greatest presidents by the American people and an increasing number of historians and political scientists. In The Essential Ronald Reagan, Edwards analyzes the four essential qualities of leadership that enabled President Reagan to meet every challenge and crisis and to make him an American "for the ages.

Dr. Lee Edwards is the Distinguished Fellow in Conservative Thought at The Heritage Foundation. A prolific writer, Lee Edwards' essays have appeared in Reader's Digest, National Review and such leading newspapers as the The Wall Street Journal, The Los Angeles Times, The Boston Globe, The San Francisco Chronicle, The Detroit News, and The Washington Times. His fifteen books range from Ronald Reagan: A Political Biography, written in 1967 to Educating for Liberty: The First Half Century of ISI, written in 2003, and include Missionary for Freedom: The Life and Times of Walter Judd, Goldwater: The Man Who Made a Revolution and The Conservative Revolution: The Movement that Remade America. Educated at Duke University, the Sorbonne (Paris) and the Catholic University of America, Dr. Edwards was a fellow at the John F. Kennedy School of Government at Harvard University, and is now an Adjunct Professor of Politics at the Catholic University of America. He was founding director of the Institute on Political Journalism at Georgetown University, is past president of The Philadelphia Society and is Chairman of the Victims of Communism Memorial Foundation. Dr. Edwards and his wife Anne reside in Alexandria, Virginia.
or
Not Currently Available for Direct Purchase
Copyright © 2020 American Booksellers Association