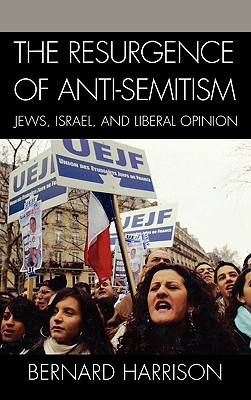 Jews, Israel, and Liberal Opinion (Philosophy and the Global Context)

Recently, Jewish voices have begun to warn against a 'new anti-Semitism' fueled by moral concerns about Israel. Opponents have retorted that opposition to 'Zionism' is by no means anti-Semitic. This book, by a non-Jewish analytic philosopher, assesses the relative merits of these opposed views and offers a detailed examination of the moral and intellectual credentials of the widespread current of opinion whose growth underlies both.

Bernard Harrison taught for twenty-nine years at the University of Sussex, successively as lecturer, Reader, and Professor of Philosophy, before moving in 1992 to the E.E. Ericksen Chair of Philosophy at the University of Utah, where he remains an Emeritus Professor. He has also taught or held research posts at the Universities of Michigan, Toronto, Cincinnati and Western Australia, and at the Australian national University. He is the author of seven books and more than fifty papers in journals and anthologies. His interests range from the philosophy of language, ethics, and the interpretation of Wittgenstein, to philosophy and literature. His recent books include Inconvenient Fictions: Literature and the Limits of Theory (Yale University Press, 1991) and Word and World: Practice and the Foundations of Language (with Patricia Hanna: Cambridge University Press, 2004).
or
Buy Here
Copyright © 2020 American Booksellers Association