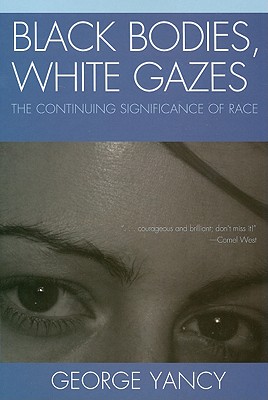 The Continuing Significance of Race

Black Bodies, White Gazes: The Continuing Significance of Race understands Black embodiment within the context of white hegemony within the context of a racist, anti-Black world. George Yancy examines themes such as double consciousness, invisibility, and corporeal malediction that capture the lived reality of Black bodies under tremendous existential duress. He demonstrates that the Black body is a historically lived text on which whites have inscribed their projections which speak equally forcefully to whites' own self-conceptions.

George Yancy teaches in the Department of Philosophy at Duquesne University. His influential edited books include: Philosophy in Multiple Voices (2007), White on White/Black on Black (2005), Narrative Identities: Psychologists Engaged in Self-Construction (2005, with Susan Hadley), What White Looks Like: African-American Philosophers on the Whiteness Question (2004), The Philosophical i: Personal Reflections on Life in Philosophy (2002), Cornel West: A Critical Reader (2001), and African-American Philosophers, 17 Conversations (1998).
Loading...
or
Not Currently Available for Direct Purchase