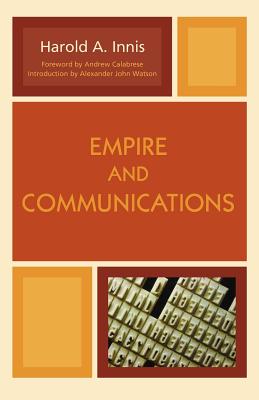 It's been said that without Harold A. Innis there could have been no Marshall McLuhan. Empire and Communications is one of Innis's most important contributions to the debate about how media influenced the development of consciousness and societies. In this foundational work, he traces humanity's movement from the oral tradition of preliterate cultures to the electronic media of recent times. Along the way, he presents his own influential concepts of oral communication, time and space bias, and monopolies of knowledge. With a new introduction by Alexander John Watson, author of Marginal Man: The Dark Vision of Harold Innis, and a new foreword by series editor Andrew Calabrese, this previously hard-to-obtain book is now readily available again. All communication scholars should have this classic book on their shelves, and it also serves as a great supplementary text in communication and economics courses.

Harold A. Innis was a distinguished political economist who was one of the first to study the history of communication; he also served as a dean at the University of Toronto. In addition to Empire and Communications, his other influential communication works include The Bias of Communication and Changing Concepts of Time. Innis died in Toronto in 1952.
Loading...
or support indie stores by buying on