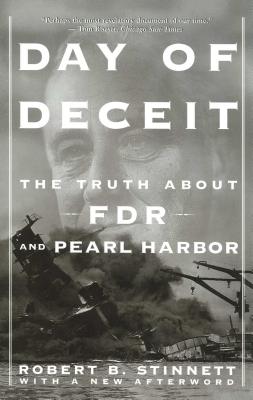 The Truth about FDR and Pearl Harbor

In Day of Deceit, Robert Stinnett delivers the definitive final chapter on America's greatest secret and our worst military disaster. Drawing on twenty years of research and access to scores of previously classified documents, Stinnett proves that Pearl Harbor was not an accident, a mere failure of American intelligence, or a brilliant Japanese military coup. By showing that ample warning of the attack was on FDR's desk and, furthermore, that a plan to push Japan into war was initiated at the highest levels of the U.S. government, he ends up profoundly altering our understanding of one of the most significant events in American history.

Praise For Day of Deceit: The Truth about FDR and Pearl Harbor…

It is difficult, after reading this copiously documented book, not to wonder about previously unchallenged assumptions about Pearl Harbor.

Robert Stinnett served in the United States Navy from 1942 to 1946, where he earned ten battle stars and a Presidential Unit Citation. He is the author of George Bush: His World War II Years. Before devoting himself to writing Day of Deceit, he was a photographer and journalist for the Oakland Tribune. He is a consultant on the Pacific War for the BBC, Asahi Television, and NHK Television in Japan. He lives in Oakland, California
Loading...
or support indie stores by buying on