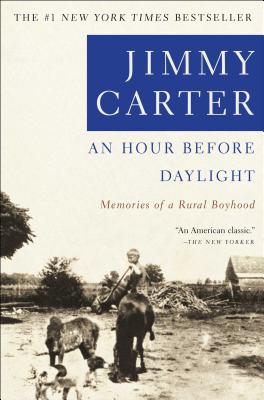 Memoirs of a Rural Boyhood

In An Hour Before Daylight, Jimmy Carter, bestselling author of Living Faith and Sources of Strength, recreates his Depression-era boyhood on a Georgia farm before the civil rights movement forever changed it and the country.

Carter writes about the powerful rhythms of countryside and community in a sharecropping economy, offering an unforgettable portrait of his father, a brilliant farmer and a strict segregationist who treated black workers with respect and fairness; his strong-willed and well-read mother; and the five other people who shaped his early life, three of whom were black.

Carter's clean and eloquent prose evokes a time when the cycles of life were predictable and simple and the rules were heartbreaking and complex. In his singular voice and with a novelist's gift for detail, Jimmy Carter creates a sensitive portrait of an era that shaped the nation and recounts a classic, American story of enduring importance.

Praise For An Hour Before Daylight: Memoirs of a Rural Boyhood…

"An American classic."
— The New Yorker

"A love story of a man's passion for his home, his family, and...for his fellow man...Will stay in the mind long after the last page is read."
— United Press International

"More than just an engaging memoir, this book is first-rate social history, a portrait of a subculture of America...a genetic road map of the making of a president."
— Ray Jenkins, Baltimore Sun

"A lovely and haunting piece of work...conveys with quiet passion...its author's love for the place in which he grew up and where, he says, he expects to rest for eternity."
— Jonathan Yardley, The Washington Post Book World