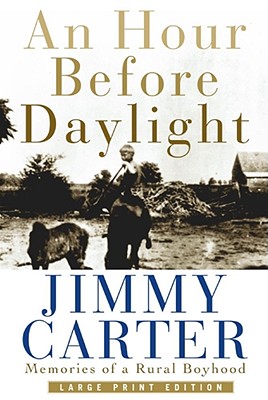 Memories Of A Rural Boyhood

In An Hour Before Daylight, Jimmy Carter, bestselling author of Living Faith and Sources of Strength, recreates his Depression-era boyhood on a Georgia farm before the civil rights movement forever changed it and the country.

Carter writes about the powerful rhythms of countryside and community in a sharecropping economy, offering an unforgettable portrait of his father, a brilliant farmer and a strict segregationist who treated black workers with respect and fairness; his strong-willed and well-read mother; and the five other people who shaped his early life, three of whom were black.

Carter's clean and eloquent prose evokes a time when the cycles of life were predictable and simple and the rules were heartbreaking and complex. In his singular voice and with a novelist's gift for detail, Jimmy Carter creates a sensitive portrait of an era that shaped the nation and recounts a classic, American story of enduring importance.