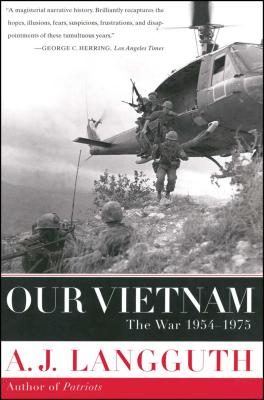 By A. J. Langguth

Twenty-five years after the end of the Vietnam War, historian and journalist A. J. Langguth delivers an authoritative account of the war based on official documents not available earlier and on new reporting from both the American and Vietnamese perspectives. In Our Vietnam, Langguth takes us inside the waffling and deceitful White Houses of Kennedy, Johnson, and Nixon; documents the ineptness and corruption of our South Vietnamese allies; and recounts the bravery of soldiers on both sides of the war. With its broad sweep and keen insights, Our Vietnam brings together the kaleidoscopic events and personalities of the war into one engrossing and unforgettable narrative.

A. J. Langguth (1933–2014) was the author of eight books of nonfiction and three novels. After Lincoln marks his fourth book in a series that began in 1988 with Patriots: The Men Who Started the American Revolution. He served as a Saigon bureau chief for the New York Times, after covering the Civil Rights movement for the newspaper. Langguth taught for three decades at the University of Southern California and retired in 2003 as emeritus professor in the Annenberg School for Communication and Journalism.

"The most complete and compelling narrative on the war."

"A history that will be admired and studied by scholars and journalists, [and] a collection of character portraits and relationships that beats most bestselling fiction."

"The best book yet on our perverse crusade to make Vietnam safe for democracy."

"Having interviewed a cast of characters worthy of Dickens, with a story line to match, Jack Langguth's history brings a new and sharper focus on the American century's enduring enigma: What were we doing in Vietnam?"
— H.D.S. Greenway, editor, The Boston Globe

"Employing new sources and up-to-date scholarship, Jack Langguth has written an excellent and accessible history of the war in Vietnam. His fast-paced narrative and his vivid portraits of the central characters will allow new generations of Americans to understand the drama of the war and the intensity of the emotions on both sides. The book is a major achievement."
— Frances FitzGerald, author of Fire in the Lake and Way Out There in the Blue

"If you thought there was nothing more to add to our knowledge of the Vietnam War, Jack Langguth's graphic narrative contains a wealth of new information and keen analysis. It is bound to take its place among the best books on the tragic conflict."
— Stanley Karnow, author of Vietnam: A History
or
Not Currently Available for Direct Purchase
Copyright © 2020 American Booksellers Association