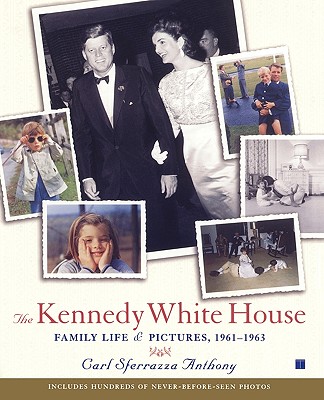 Packed with never-before-seen photographs, The Kennedy White House reveals the world's most famous family, unstaged and as they were, both behind White House doors and in their private homes in Virginia, Palm Beach, Newport, and Hyannis Port. Carl Sferrazza Anthony's fascinating narrative brings new insight to the Kennedy story, in the first book to place the family within the context of 1960s culture and view historical events uniquely from the personal perspective of their family life. A candid and compelling tour, The Kennedy White House "takes you inside the world's most famous goldfish bowl for a glimpse at life in the White House as you've never seen it before" (Julie N. Eisenhower).

Helen Thomas Author of Front Row at the White House and Thanks for the Memories, Mr. President Carl Sferrazza Anthony has done it again; The Kennedy White House is a lasting treasure. The book reminds us all of the inspiration and hope that prevailed in the Kennedy era.

James MacGregor Burns Pulitzer Prize-winning author of Roosevelt: The Soldier of Freedom and coauthor of Dead Center: Clinton-Gore Leadership and the Perils of Moderation A double treat -- a remarkably informative text closely tied to a rich feast of photographs.

Carl Sferrazza Anthony, the author of four previous books including America's First Families, has written frequently for The Washington Post, The New York Times, The Los Angeles Times, and Details. The nation's leading authority on the political power and social influence of First Ladies, he served as one of Nancy Reagan's speechwriters.
Loading...
or support indie stores by buying on