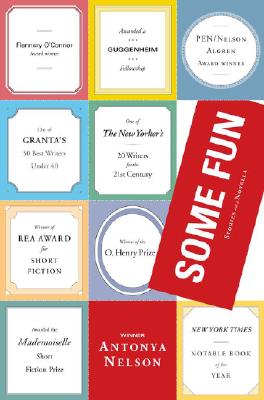 Stories and a Novella

One of the most award-winning, critically acclaimed story writers working today, Antonya Nelson has a list of accolades that is astonishing for any writer, but especially for one as young as she. With her newest collection, Nelson once again proves herself worthy of her stellar reputation, delivering seven taut, striking stories and a brilliant novella, all exploring the tensions of troubled family relations.

Nelson is an extraordinary chronicler of the fraught relationships between parents and children and husbands and wives. With her particular understanding of the threats and vulnerabilities of wild adolescence, as well as the complicated, persistent love that often lies dormant beneath the drama of rebellion, she illuminates the hidden corners of her characters' lives.

The shy, shoplifting sixteen-year-old protagonist in the title novella is trying to understand how to become an adult while going through a year of family disaster. We watch as she dabbles in the same adult behaviors that so repulse her about her parents (binge drinking, sex) while maintaining so much of her adolescent insecurity and confusion. "Dick" is a moving story about a mother who, having lost her daughter to the vicissitudes of adolescence, has a compulsion to protect her innocent, preadolescent son from the aggressive and encroaching post-9/11 adult world. The homeless teen at the heart of "Eminent Domain" is a pampered Houston rich girl who has, for her own reasons, taken to the streets.

Radiating an emotional intensity that unifies the entire collection, each of Nelson's stories both captivates and unnerves. As her characters run the gauntlet of often bewildering family tensions and trauma, she alternates hope and despair, resentment and love, in perfectly recognizable proportions.

Weaving wonderful observation with quick wit and striking insight, "Some Fun" is a timely and provocative inventory of the state of family in America -- and proof of why Nelson is one of the most important writers at work today.